Here we study a pumping device capable of maintaining a density gradient and a flux of particles across a membrane. Its driving mechanism is based on the flashing ratchet effect powered by the random telegraph process in the presence of thermal fluctuations. Unlike Brownian motors, the concentrations at both reservoir boundaries need to be implemented as boundary conditions. The residence transition rates of the dichotomic flashing are related to the binding and hydrolysis of ATP molecules. The model is exactly solved and explored. The pump energetics is discussed and the relevant parameter values are tuned within a biological scale.

For systems in an externally controllable time-dependent potential, the optimal protocol minimizes the mean work spent in a finite-time transition between two given equilibrium states. For overdamped dynamics which ignores inertia effects, the optimal protocol has been found to involve jumps of the control parameter at the beginning and end of the process. Including the inertia term, we show that this feature not only persists but that even delta-peak-like changes of the control parameter at both boundaries make the process optimal. These results are obtained by analyzing two simple paradigmatic cases: First, a Brownian particle dragged by a harmonic optical trap through a viscous fluid and, second, a Brownian particle subject to an optical trap with time-dependent stiffness. These insights could be used to improve free energy calculations via either thermodynamic integration or “fast growth” methods using Jarzynski’s equality.

By different coarse-graining procedures, we derive lower bounds on the total mean work dissipated in Brownian systems driven out of equilibrium. With several analytically solvable examples, we illustrate how, when, and where the information on the dissipation is captured.

We reformulate the result for the entropy production given in Phys. Rev. Lett., 98 (2007) 080602 in terms of the relative entropy of microscopic trajectories. By a combination with the Crook’s theorem, we identify the path variables that are sufficient to fully identify irreversibility. We show that work saturates the relative entropy, and derive the entropy production for stochastic descriptions.

A Brownian pump of particles powered by a stochastic flashing ratchet mechanism is studied. The pumping device is embedded in a finite region and bounded by particle reservoirs. In the steady state, we exactly calculate the spatial density profile, the concentration ratio between both reservoirs and the particle flux. We propose a simulation framework for the consistent evaluation of such observable quantities. 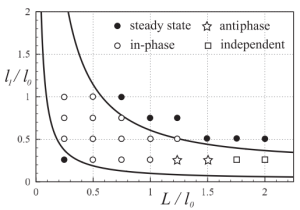 We propose a novel mechanism leading to spatiotemporal oscillations in extended systems that does not rely on local bulk instabilities. Instead, oscillations arise from the interaction of two subsystems of different spatial dimensionality. Specifically, we show that coupling a passive diffusive bulk of dimension d with an excitable membrane of dimension d-1 produces a self-sustained oscillatory behavior. An analytical explanation of the phenomenon is provided for d=1. Moreover, in-phase and antiphase synchronization of oscillations are found numerically in one and two dimensions. This novel dynamic instability could be used by biological systems such as cells, where the dynamics on the cellular membrane is necessarily different from that of the cytoplasmic bulk. 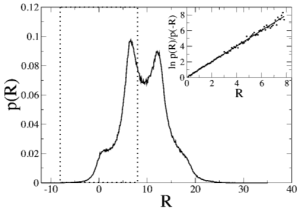 We derive a simple closed analytical expression for the total entropy production along a single stochastic trajectory of a Brownian particle diffusing on a periodic potential under an external constant force. By numerical simulations we compute the probability distribution functions of the entropy and satisfactorily test many of the predictions based on Seifert’s integral fluctuation theorem. The results presented for this simple model clearly illustrate the practical features and implications derived from such a result of nonequilibrium statistical mechanics.

We study analytically a thermal Brownian motor model and calculate exactly the Onsager coefficients. We show how the reciprocity relation holds and that the determinant of the Onsager matrix vanishes. Such a condition implies that the device is built with tight coupling. This explains why Carnot’s efficiency can be achieved in the limit of infinitely slow velocities. We also prove that the efficiency at maximum power has the maximum possible value, which corresponds to the Curzon-Alhborn bound. Finally, we discuss the model acting as a Brownian refrigerator.

The heat fluctuation probability distribution function in Brownian transducers operating between two heat reservoirs is studied. We find, both analytically and numerically, that the recently proposed fluctuation theorem for heat exchange has to be applied carefully when the coupling mechanism between both baths is considered. We also conjecture how to extend such a relation when an external work is present.

We present a model for a thermal Brownian motor based on Feynman’s famous ratchet and pawl device. Its main feature is that the ratchet and the pawl are in different thermal baths and connected by a harmonic spring. We simulate its dynamics, explore its main features and also derive an approximate analytical solution for the mean velocity as a function of the external torque applied and the temperatures of the baths. Such theoretical predictions and results from numerical simulations agree within the ranges of the approximations performed.

In this paper, we present a model of a symmetric Brownian motor which changes the sign of its velocity when the temperature gradient is inverted. The velocity, external work, and efficiency are studied as a function of the temperatures of the baths and other relevant parameters. The motor shows a current reversal when another parameter (a phase shift) is varied. Analytical predictions and results from numerical simulations are performed and agree very well. Generic properties of this type of motor are discussed.

The present thesis is devoted to study the effect of thermal fluctuations on small systems driven out of equilibrium. Transport properties and macroscopic crucial thermodynamic concepts and ideas like the second law will be revisited and discussed on mesoscopic grounds. In particular, the thermodynamic properties of idealized small machines will be characterized, paying special attention to two- temperature Brownian motors and the conditions for the attainability of Carnot efficiency. Moreover, other type of Brownian devices also based on the ratchet effect will be analyzed under the name of Brownian pumps. Macroscopic quantities like the work applied externally to a system or the heat dissipated into a thermal reservoir will be exported to stochastic descriptions, in which fluctuations are present and relevant. In characterizing the nonequilibrium behavior (and further than just considering the first law at the level of stochastic trajectories), we will illustrate the physical meaning of a generalized entropy at such level. Then, instead of just focusing on mean values, further theoretical progress on the fluctuations themselves will be possible through the so-called fluctuation theorems, which basically constrain the properties of probability distributions of work, heat and entropy. Ultimately, from such coarse-grained mesoscopic descriptions, our investigations will try to reveal the meaning of equilibrium and to scrutinize the nature of irreversibility.